The February 2015 issue of The Writer’s Chronicle features Grace Cavalieri’s “The Last Word: The Poet and the Poem from The Library of Congress, Poets Laureate on Public Radio, 1977-2014.” In her piece, she quotes Louise Gluck who held the chair in 2003-2004. Gluck noted, “We have to contend with the idea of mortality: We all, at some point, love, with the risks involved, the vulnerabilities involved, the disappointments and great thrills of passion, so what you use is the self as a laboratory in which to practice, master, what seem to you central dilemmas.” Your chapbook Something to Help Me Sleep (Dancing Girl Press, 2012) and your forthcoming novel that I had the privilege of hearing you read earlier this year at Indigo Bridge Books, are concerned with love, desire, romance, and attraction. Talk about how you contend with love in your work.

What a great question, Madeline. A lot of my work revolves around questions of sexual power, which is to say that I’m interested in love, in questions of desire, but I’m specifically interested in how it plays out when the playing field isn’t level. And of course, in our culture, it never is. Even the most feminist of us (and I consider myself in this group) are informed by our experiences with the patriarchy, and what gets really uncomfortable is when we start to consider how many of those experiences feel positive, how many of those experiences allow us to feel, as women, some kind of power. It’s a limited power, certainly.

I think also, there’s not a lot of nuance available to women when it comes to love and desire. We can be sexual or frigid. Stand-offish or clingy. A doormat or a bitch. And then of course, to navigate the power dynamics, these things become performance. We perform aloofness. We perform sexuality. We perform whatever it is that we think will get us to the place that we want, which is, often, just a place where we can stop fucking performing for once.

And I don’t mean to say that men don’t have similar experiences or feel constrained by expectations of masculinity. I like to talk about the patriarchy (a lot), but in general I’m interested in attacking the system. I feel a great deal of sympathy for the men who have to live in it. In the end though, it’s my job to speak to the experience of being a woman, so that’s where my focus is.

In the chapbook, the character Ella is lovesick, heartsick, and while she’s craving the experience of love, she doesn’t want the vulnerability that comes with it. So she takes these lovers, except that they aren’t really lovers, they are stock characters recruited to play a part, to act it out—the fingers on the wrist, the teeth on the lip. In the morning, she is always, ever, alone. And yet, there’s still a vulnerability there because of the judgment she’s internalized, the ‘dirtiness’ she’s picked up. I’m interested also in how the stories we tell ourselves are versions, usually ugly versions, of stories the world tells, so I very much like subverting gender tropes. Ella is then a fairytale character, but of course her narrative arc is inverted. What kind of girl are you if you don’t run away at midnight? What kind of girl are you if the prince doesn’t follow you home? 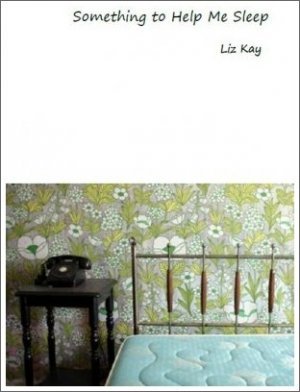 I’m teaching in women’s and gender studies this semester. I very much appreciate your response. One of the articles I’m teaching this term explores the dominant heterosexual scripts that limit the ways women engage in heterosexual encounters and quotes Judith Butler’s suggestion “that discourses do actually live in bodies. They lodge in bodies, bodies in fact carry discourses as part of their lifeblood” as a means by which to describe the internalization of gendered stories and the ways those stories playout in women’s lives. I’m interested in resistance and the ways writers resist hegemonic narratives even as they work within discourses that reinscribe oppressions. Talk about writers you admire that are doing the work you seek to do in the chapbook form and in other genres.

Oh, absolutely! I’m always interested in work that explores the margin between expectation and experience. I loved Pamela Erens’ The Virgins, which is such a smart examination of sexuality–it’s limits and demands. I think what I love most about the book, though, is it’s very conscious use of POV, with the narrator a sort of obsessive voyeur who’s building the intimate moments shared by the main characters almost entirely in his imagination. Their sexuality, then, is a projection of both his own desires and broader cultural judgments.

Jenny Offill‘s Dept. of Speculation is this very intimate portrait of a marriage, and it’s exquisitely written.

I also really loved Gillian Flynn’s Gone Girl, which I think is one of the smartest examinations of gender tropes I’ve read in years. We have these really horrible characters who quite consciously perform “grieving husband,” “precocious daughter,” “rape victim.” It’s a fun read, but it’s also just really, really smart.

On the very opposite end of the spectrum, Veronique Olmi’s Beside the Sea is the most important book I am loathe to recommend.

The premise, if you’re not familiar with it, is that a mother takes her two children for a seaside holiday before she kills them. It’s really an act of psychic violence, reading this book, but it’s a glimpse into both serious psychosis, and at the same time, an exaggeration of both the love and failures we, as mothers, constantly feel.

Writers and poets often talk about advocating for their work, promoting their work, and supporting the work of other writers by giving back, thereby creating a community where literary endeavors of small presses and the writers they publish is celebrated, discussed, and read. What strategies of advocacy and promotion do you think are most helpful?

I think it’s difficult to find the balance between promotion and engagement, and I think if you’re going to get the balance wrong, err on the side of engagement. The end goal is for the work to get out there, to be read, to be talked about, but there’s that sales aspect along the way that gets uncomfortable. And I’ve seen it handled poorly. I’ve gotten email blasts with “Buy my book!” in the subject line. I’ve also seen writers with new books (I know they have a new book) who never ever breathe a word about it. I don’t think either approach is going to get you there. I recognize that selling is uncomfortable, but what’s never uncomfortable is conversation. I love interviews and essays and blogs. I love to hear writers talking about their own struggles with the work and with publishing, talking about what they’ve learned along the way. And talking about what they’re reading! God, writers are some of the smartest, best readers there are, and I want their recommendations. I also love to hear publishers talking about the books they’re passionate about. I don’t know if you go to AWP, but one of my favorite things about AWP is the book fair. There are basically 3 types of tables in the book fair. There are the unmanned tables–or the may as well be unmanned because the person sitting behind it is never going to look up unless you’re actually trying to put money in their hand. There are the pushy tables, where you almost don’t want to stop: Do you have a subscription? Why don’t you have a subscription? Are you on our email list? And then there are the tables where people are talking, really talking, about books.

Sometimes, when I turn around, Jen (Lambert, my co-editor) is hand-selling a book or journal she just bought from another publisher. She’s like, Look at this cover. Look at this art. And then she’s chasing them away from our table because god, they’d better go buy that book before the other publisher sells out. And, honestly, these are the people who come back day after day. They come to see us the following year. They buy our journals (when they can). They follow the poem of the week series on our blog. Sometimes we overhear these Twitter exchanges between reader and poet, and that’s the end goal–not the sales, but the conversation. So, I think, you do what you can to create those moments of connection. And really, it shouldn’t be that hard–we have this thing right in front of us that we’re all passionate about.

What makes a good chapbook?

I think what I love about chapbooks is that they tend to be cohesive. They tend to be thematic or narrative projects. They tend to be distilled. This is what I look for too in full-lengths, but I think I find in more in chapbooks. I am drawn to series work, and the chapbook in particular seems to be where that kind of work is thriving these days. 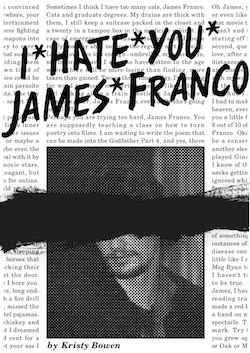 What chapbooks are inspiring you these days?

The last chapbook I read was yours–threnody. I knew I wanted to read it when I heard you read some of the death poems from it.

Kristy Bowen (who is like the patron saint of chapbooks) has an electronic chapbook I Hate You, James Franco that I’m completely in love with. I don’t know how many times I’ve read it at this point.

What chapbooks or chapbook poets have impacted your writing the most? Kristy Bowen, hands down. I love her work, but I also think that the books she puts in the world through {dancing girl press} are exquisite and sharp and so smartly curated.

What’s next for you? I am deeply enthralled with fiction now. Since my chapbook Something to Help Me Sleep, which is a narrative sequence, I’ve just been moving farthing into narrative and character and then I was like, “dialogue seems fun,” and now I’m hooked. I am, as we speak, finishing some revisions on my forthcoming novel Monsters: A Love Story. And as soon as I send that off, I’ll get back to a novel that’s in progress.

Number of chapbooks you own: Don’t know. Dozens?

Ways you promote and serve other chapbook poets: I think one thing I love about chapbooks is that you can buy more of them. I mean, they tend to be 5-7 bucks? And they’re little, and you can carry a whole bunch of them back from AWP. And then you haven’t invested a ton of money, so you can pass them along. I love introducing someone to a new writer, and I think chapbooks are a perfect way to do that.

Where you spend your chapbook earnings: Ha! You are hilarious.

Bio: Liz Kay is a founding editor of Spark Wheel Press and the journal burntdistrict. Her poems have appeared in such journals as Willow Springs, Sugar House Review, and Beloit Poetry Journal. She is the author of a chapbook, Something to Help Me Sleep (dancing girl press, 2012). Her debut novel Monsters: A Love Story will be published by Putnam in 2016.

the chapbook interview: Lynn Schmeidler on research, the brain, and humor