You’re the author of a three chapbooks, The Poetry Project (2014), Over the Hill and Through the Woods (2012), and The First Kiss and Other Poems (2007). You also have a BA in Modern Literature. What did you learn in school about the chapbook?

In all my time studying modern literature at the university level, I don’t remember a teacher ever mentioning chapbooks. It wasn’t until after college, when I began to pursue writing as a career (oh, my, the misconceptions I had), that I began to learn about alternative avenues of publication, such as zines, chapbooks, and small presses. It’s been a slow discovery, one largely driven by my growing involvement with creative communities both online and in person. I didn’t quite understand chapbooks at first, what they were and what they were capable off as creative objects. Now, I find myself becoming more and more interested in chapbooks and how small spaces can allow writers room for a great amount of creativity. If I’m at an event and a writer has a chapbook available, it’s pretty much a given that I’m going to buy it. I want to collect as many chapbooks as I can and I am particularly fascinated by beautiful hand-bound and crafted chapbooks, as well as the do-it-yourself possibilities, which is how The First Kiss and Other Poems (and all of my existing chapbooks, really) came about.

You chapbook Over the Hill and Through the Woods retells fairy tales and folk lore. Discuss your process for writing poems based on research and pre-existing texts.

For most of the poems, I wrote based on my own memory of the tales I’ve loved most of my life. Although, for a few, particularly lesser known tales, such as “Snow White and Rose Red,” I refreshed my memory by turning to the traditional versions. Sur la Lune Fairy Tales was particularly helpful in this regard.

Sur la Lune was also where I discovered a third ending for “The Little Mermaid.” The first is the well-known Disney, happily ever after ending. The second ending is rather bleak, in which the prince marries another princess and the mermaid throws herself into the sea, becoming nothing more than sea foam because mermaids don’t have souls. The third ending, as told on Sur la Lune, provides a sadly hopeful ending—when the mermaid casts herself into the sea, she becomes a kind of spirit. As a spirit and by doing good deeds, she is able to earn a soul of her own and ascend to heaven. This third version is what inspired my poem “The Sea Witch,” and it’s the only poem in the collection for which I did additional research, looking into the mythology of sea witches and the kinds of spells they cast, some of which I included in the poem. Most of this information I found online, through wikipedia and other sources.

What contemporary writers do you admire who do similar retelling work?

Catherynne M. Valente is a poet and novelist and her work is phenomenal, with richly textured language. I love the ways she adapts fairy tales and folklore, presenting unique feminist spins on old stories, while still evoking the feeling of magic you get from the original tales. Her novel Deathless retells the Russian folktale, Koschei the Deathless, interweaving historical aspects the Russian Revolution. The folk feeling is maintained through repeated imagery and patterns of three, a common number in folklore. And Valente’s novella Six-Gun Snow White sets the Snow White tale in the Wild West and turns the dwarves into a troupe of female outlaws.

The Fables graphic novel series by Bill Willingham is also fantastic, interweaving multiple fairy tales all into one story with a mixture of frightening and comedic results. Prince Charming is an arrogant, charming jerk, who was married to Snow White, Briar Rose, and Cinderella at one time or another—and they all hate him.

In terms of poetry, I recently read Poisoned Apples: Poems for You, My Pretty by Christine Heppermann, which explores the horrors of being a teenage girl using fairy tales and mythology.

There are also some excellent lit journals that publish fairy tale and folklore retellings from time to time, such as Goblin Fruit, Stone Telling, and Cabinet Des Fées.

Your chapbook The Poetry Project collects poems inspired by prompts during National Poetry Writing Month. Each poem in the chapbook offers readers an author’s note indicating the prompt that inspired the piece. Talk about prompts as a means towards inspiration. How does such a daily schedule motivate an artist to make new work?

For The Poetry Project, I invited readers to participate by submitting a phrase or word as inspiration for a poem. The actual project took place slowly over the course of a couple of years as readers sent in prompts. Sometimes the prompts would inspire a poem immediately and I would let the words spiral off into whatever direction they wanted to go. Other prompts required more work to wrap my head around and I would spend days or sometimes weeks, kneading the idea like taffy until I could stretch it into something that worked.

What I love about prompts are the ways they stretch the mind. Sometimes I find myself writing about the same kinds of things in the same kinds of ways over and over again. Prompts can get you thinking in new directions, send you down paths you might not have visited before.

I have also participated in a number of National Poetry Writing Month daily challenges and for a year attempted to hand write a poem every morning in a journal. I rarely succeed in completing a daily challenge because I’m too distractible. But daily exercise of my writing skills always feels beneficial. It’s like getting up in the morning and stretching; the more I stretch the looser my muscles feel, but when I leave off for days or weeks, the movement at first is painful. It’s the same with writing—the longer I wait between writing sessions, the harder it is to get back into the flow of words again when I return to the page.

I used Wattpad, a digital publishing platform that is free to both readers and writers, for Over the Hill Through the Woods and The Poetry Project. I learned about Wattpad from Margaret Atwood, who has published some poetry on the site. In 2012, Atwood partnered with Wattpad to hold a poetry contest and I joined the site in order to participate. Over the Hill Through the Woods was created as a result of that contest.

Wattpad is ideally designed for serializing works, allowing writers to post a chapter or portion of a work in progress over a number of weeks or months. The platform is primarily designed for engagement with readers, allowing them to comment on each chapter as they are posted. There is no way for writers to earn money for their work, although I’ve seen a few writers gain enough of a readership to attract the attention of traditional publishers.

One of the biggest benefits to a platform like Wattpad is the way it provides that reader interaction, which was what made The Poetry Project so much fun for me to create. The readers and I were able to participate jointly in the creation of the project, which seemed to make them more invested as the project went on.

The challenge is having to do everything yourself. I had to find a way to create the covers and make them compelling — something I have discovered I’m not very good at. It requires self editing (unless you can afford to pay someone). It also meant doing my own marketing. In the case of Wattpad, this means engaging in the community by participating in chatrooms and reading and commenting other writers’ work — all of which was very time consuming. It was time I could have spent working on another writing project.

I also created a hand-folded chapbook, called The First Kiss and Other Poems, which was a very limited edition (less than fifty, I believe) for those who donated to my Hike for Discovery fundraising challenge. This was fantastic fun (though all the hand-folding was quite tedious) and I loved holding the tiny little book in my hand. I always think about what sorts of hand-folded book I might try again, but then I remember how long it actually took to do the folding and I hesitate.

How do you define chapbook? A small-ish book of writing under 40 pages.

What makes a good chapbook? My favorite poetry chapbooks have a theme of some sort, so that they unfold almost like a story. A beautiful binding of some sort also fills me with joy. 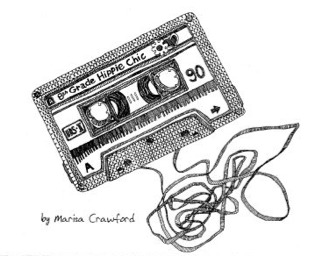 What chapbooks are inspiring you these days? I adore 8th Grade Hippie Chic by Marisa Crawford and TEN by Val Dering Rojas. Both are very different, but what they have in common is vivid language and beautiful printings.

What do you look for when you put together a chapbook? I start with poems I’ve published and look through my files for what I consider to be my best work. Then, I organize them by similar tone in order to find a cohesive whole. This is a skill that I’m still in the process of learning.

How are you trying to get better as a chapbook poet? Gathering up and reading as many chapbooks as I can get a hand on helps immensely in understanding what works and what doesn’t. I’ve learned a lot from my friend Allie Marini, who released two chapbooks so far this year — Pictures From the Center of the Universe and wingless, scorched & beautiful — with more on the way. Her chapbooks have a great sense of theme, which I’m just learning to apply to my own work.

What’s next for you? I recently finished a chapbook collection called Sincerely Yours, In Spirit, If Not Yet In Body, which is out on submission. I’m hoping it will get picked up and published within the next year. I’m working on a book length collection of poetry and have a novel in poems that I am in the progress of putting together.

Number of chapbooks you own: Not nearly enough, as far as I’m concerned. Maybe a dozen, but probably less.

Number of chapbooks you’ve read: Around a dozen, so far, I think. Again, not nearly enough.

Ways you promote and serve other chapbook poets: I read and review chapbooks and post the reviews on my blog and elsewhere. I’ve also started a Poet Spotlight interview series to highlight poets whose work I enjoy. I try to be active in attending open mics, book launches, and other author events to cheer others on and buildup my chapbook collection.

Where you spend your chapbook earnings: Earnings? What are those?

Your chapbook wish:To connect with an artist and cooperatively put together some sort of limited edition, hand-bound mixture of words and illustrations.

Job: I’m a managing editor at a technical trade magazine.

Bio: Andrea Blythe graduated from UC Santa Cruz with a BA in Modern Literature. She lives in the Bay Area of Northern California, where she writes poetry and fiction. Her poetry has appeared in several publications, including Nonbinary Review, Linden Avenue, Chiaroscuro (ChiZine), Strange Horizons, Perigee, Bear Creek Haiku, and Chinquapin. Her work has been nominated for a Pushcart Prize and a Rhysling Award. You can find her on the web at: www.andreablythe.com.

Tracy Mishkin on audience, inspiration, and the art of fabulous titles

Steve Langan on waiting for poems